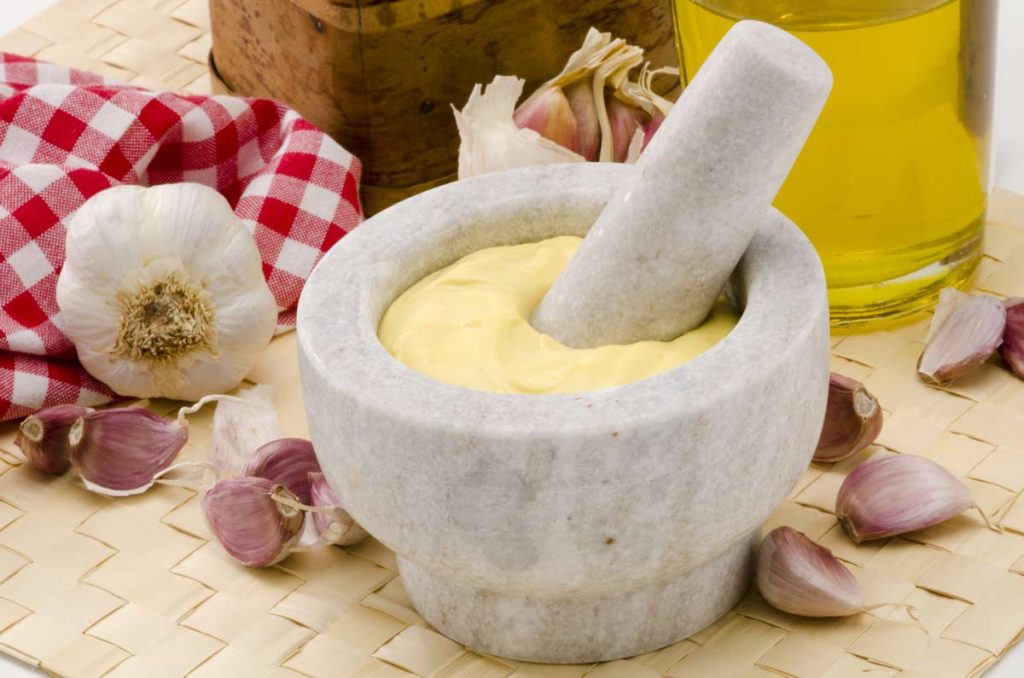 If you love fish and seafood dishes, you must try the aioli sauce recipe which we recommend you to prepare today.

It is perfect to have with dishes made of fish; its smell and garlicy flavor make it unmistakable and delicious.

It is also used to cook grilled meats such as chicken and rabbit.

Its name comes from Catalan and it means garlic and oil, that´s why it is also known as ajiaceite or ajaceite, ajolio in Aragon and ajoaceite in Castilian.

So, if you want to learn how to prepare homemade Aioli sauce, pay close attention to the step-by-step instructions we offer you next.

Controversy exists around the elaboration and the ingredients used to prepare it; this is an ancient debate, which of course, if we are going to talk about this traditional sauce we cannot avoid this topic which has caused so much confusion.

For this reason, we want you to know everything about Garlic Aioli sauce: its true origin, the authentic recipe and the variants that nowadays are prepared worldwide.

What is the origin of Aioli?

The origin of this delicious sauce made of garlic is attributed to the Ancient Egyptians, although, the Romans were the ones who made it popular in Italy and Sicily after they passed through this nation.

In the meantime, in the Iberian Peninsula, the Andalusians spread it north to the Balearic Islands and to Provenza, a French territory.

Nowadays, it is a dish that represents the gastronomy from the entire Mediterranean region.

This emulsion made of olive oil and garlic is very similar to a typical sauce from Lebanon, Turkey and Syria, known as Toum.

How to make Garlic Aioli?

Nowadays, it is very common for people to ask the question of how to prepare Aioli without using eggs.

The truth is that the original version of this sauce does not need eggs.

The authentic recipe consists of crushed garlic and extra virgin olive oil with a creamy consistency.

Originally, this preparation was hand-made using a mortar and pestle; even ceramic mortars have been created for this reason.

To get it perfect we must be patient because it is a preparation that curdles easily if we do it too quickly.

Another factor that affects its consistency is adding all the oil at once; add it bit by bit as we stir the sauce. 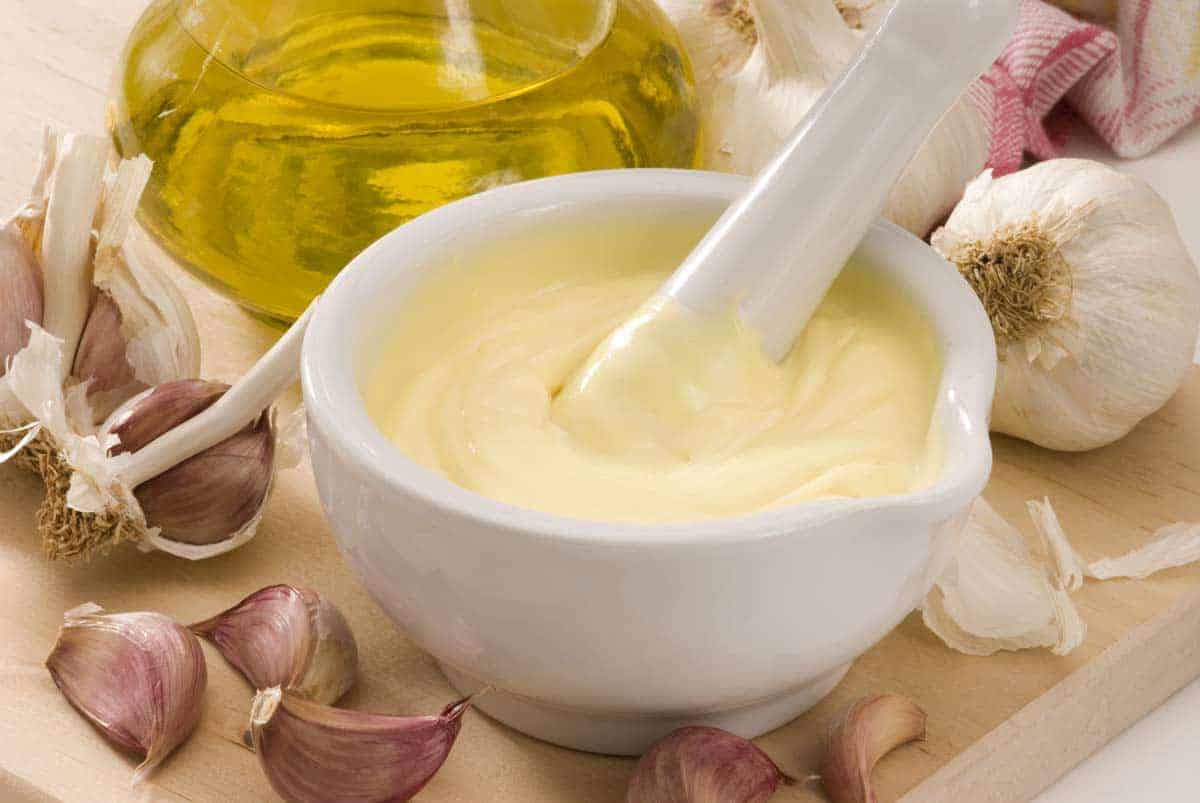 An authentic Aioli sauce recipe, a homemade preparation with an unmistakable scent and flavor, perfect to be enjoyed with grilled dishes, fish and other seafood.

The first step is to have the mortar and the pestle at hand and add the pinch of salt. This step is very important because it is going to help the garlic release its juice while it is crushed.

Then, add the peeled garlic cloves and start crushing them until they are well grounded.

At this point, start adding oil bit by bit for a better emulsion; first, just add a few drops of oil and crush again for 10 or 20 seconds.

Repeat this step several times until almost all the oil is used; if you use a cruet it will be much easier. It is important to add the oil bit by bit so the sauce doesn’t curdle.

As soon as we notice the sauce is starting to emulsify, add a bigger amount of oil but not too much and keep crushing for 10 or 20 seconds.

When the oil has been used up, and the sauce has a creamy consistency, add the lemon juice or the vinegar.

And now the aioli sauce is ready, pour it in a bowl, cover it up and put it in the fridge. It can be consumed a few days after being prepared.

In order to avoid excessive smell, remove the inner stem of the garlic clove.
On the other hand, if you want a spicier sauce with a stronger flavor, you can add 1 or 2 more garlic cloves.
Furthermore, if you do not have a mortar and pestle, you can prepare the sauce using a blender or similar equipment.

As we already mentioned, traditional Aioli sauce is simply garlic and extra virgin olive oil ground-up into a cream.

But it is not a secret that there are variants of this recipe with the aim to create a garlic-flavored sauce in an easier way.

For example, we can mention the most common one: homemade Aioli with egg, which is not necessarily prepared in a mortar.

This variant has a light mayonnaise and garlicy flavor, with some spices emulsified with an egg yolk using a blender.

The result is less liquid than the original recipe and this is the reason many people prefer it this way.

On the other hand, we find the Aioli made with quince, peach or almond, besides the well-known Aioli negado.

This last one does not get to emulsify completely, but it has the consistency of vinaigrette to use it as a seasoning for many recipes.

And if you do not know how to prepare Aioli with milk, it is very simple; you just have to replace the egg yolk with the milk

This one has an extremely light texture, a perfect option for people who are allergic to eggs.

You can also prepare thermomix Aioli by adding the ingredients to this machine.

To prepare this sauce in a thermonix, crush the garlic first at speed 8 for 5 seconds, and then add the rest of the ingredients and beat them at speed 5 for 6 seconds.

Some of the spices used for the elaborations are white pepper, parsley, mustard and onion.

What should I do so the Aioli sauce doesn’t curdle?

The secret to always getting a perfect sauce that doesn’t curdle is to use all the ingredients at room temperature.

If you do this and still you notice that the sauce starts curdling, just add a bit more oil and keep grinding.

Another trick is to get the texture back by adding a piece of boiled potato.

Even if you add another egg you can get its characteristic creamy texture back.