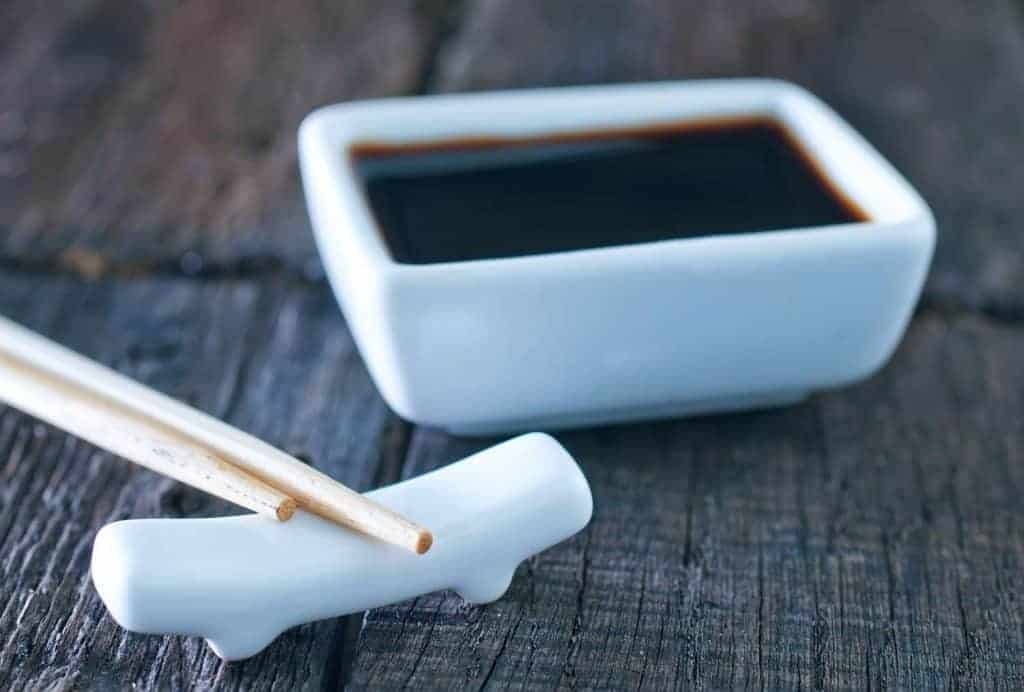 If you love cooking, then you will enjoy this article because in it you will find useful and detailed information about soy sauce.

As we’ve said in the past, behind every good recipe is an extraordinary and meaningful story.

So if you want to know how to make soy sauce and every detail of this marvelous condiment, stay and enjoy all the information that we are bringing you today.

Soy sauce is part of the list of the most popular and ancient sauces that exist in the world.

This millenary sauce, more than 2,500 years old, is the preferred sauce for many dishes, not just because it’s paired with sushi, but also because it gives a delicious flavor to numerous meat and seafood dishes, and even combines with vegetables to give a perfect taste.

This sauce was born around 2,500 years ago, in ancient China, as an alternative to using meaty sauces.

It is the result of the fermentation of soy grains along with toasted wheat. Tis technique to conserve food has been used for centuries in the Asian country.

In the first stage, often meats were salted and the resulting liquid was used as a condiment.

With the spread of Buddhism, vegetarian lifestyle was also propagated, so it was then that the substitution of meaty products with vegetables became popular.

Since grains were the easiest crop to cultivate, people decided to develop a fermentation method to conserve them so that they would last longer.

What they created was known as “jiang”; a precursor to modern soy sauce.

Soy sauce gives a lot of health benefits due to its high levels of nutrients.

Among which we can mention its fiber and protein content, fundamental nutrients for adequate internal functioning of an organism.

Many studies confirm that the consumption of soy sauce reduces the symptoms caused by arthritis and menopause.

It also contains essential amino acids and reduces the risk of cardiovascular disease.

It also contributes in the retention of calcium in the bones, improving their health.

It also helps in reducing the number of triglycerides and LDL (bad cholesterol), thereby helping those who wish to lose weight.

Lecithin is a food supplement that helps in brain and heart function, and controls the lipid levels in the blood, impeding the accumulation of fat buildup. 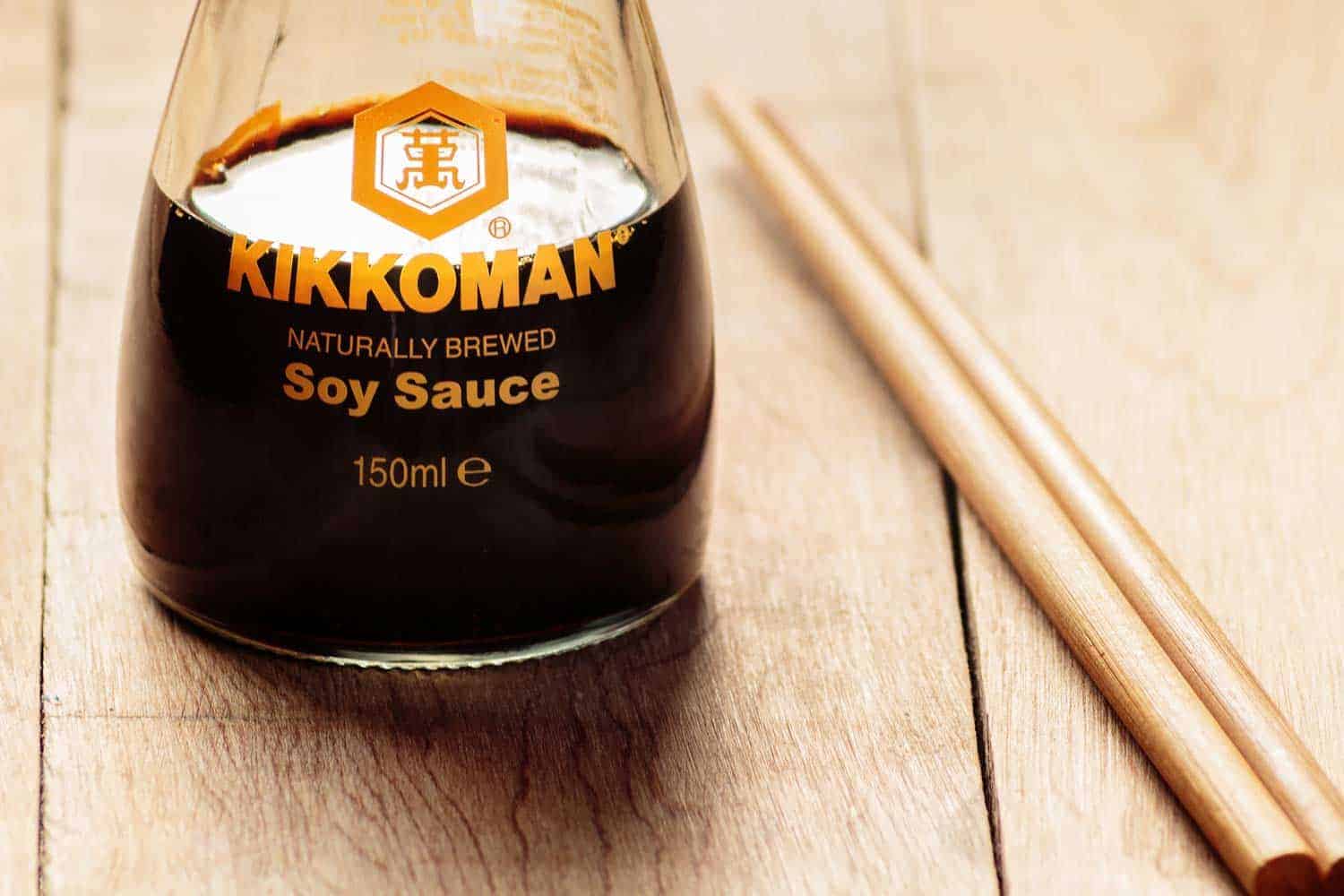 Currently, various brands of soy sauce are sold, which will detail shortly, and although the true soy sauce is dark and salted with a touch of sweetness, each one of these brands has these characteristics, but also contains their own peculiarities.

This brand has many great-quality products, is over 300 years old, and boasts sauces that are low in salt as well as ones without gluten.

It comes in bottle form and is perfect to prepare typical Japanese dishes such as Nigri, sushi, and Sashimi, among others.

Some of its star products include the low-salt soy sauce, the wok, and the Tamari (43% less salt, low in sodium, and gluten-free), naturally fermented.

Tamari sauce contains water, soy beans, vinegar made of wine and salt, has 57 calories in every 100ml, 10 grams of protein, 0 fat, and 2.0 carbohydrates.

On the other hand, Lee Kum Kee soy sauce is also great quality, and it’s been a family-run business for over 125 years.

It is characterized by its intense black color, strong taste, and low salt content; a world-renowned sauce of high prestige.

Like the previous brand it has a lot of sauces that are gluten-free, with a soft sweet taste, ideal to season vegetables, fish, seafood, and other typical dishes from Chinese cuisine.

Perfect to enjoy with delicious food, barbecues, salads, chicken, and even sushi and teppanyaki.

Its main ingredient is Maggi juice, which combines perfectly with any vegetable, meat, or fish.

This is an Oriental recipe more than 40 years old, idea for Japanese as well as Chinese dishes.

Its usage has expanded to the international level, with high-quality standards perfect for any type of meat or fish dish.

What is the best soy sauce?

The best soy sauce is the one that contains the least amount of salt. Sodium is a macromineral that performs very important functions, especially in the muscles and nerves.

It is recommended that it is consumed in moderation, as large quantities of the mineral are harmful to one’s health.

The established daily proportions of sodium are incorporated naturally in food; an excess can result in arterial hypertension, as well as kidney failure.

Dieticians recommend consuming 2.3 grams a day, which is about the same amount as a tablespoon.

We’ve all heard it said that soy sauce causes you to gain weight, and that is due to precisely this small detail- the proportion of salt in contains.

The prices vary according to country, brand, and the quantity, among other aspects. 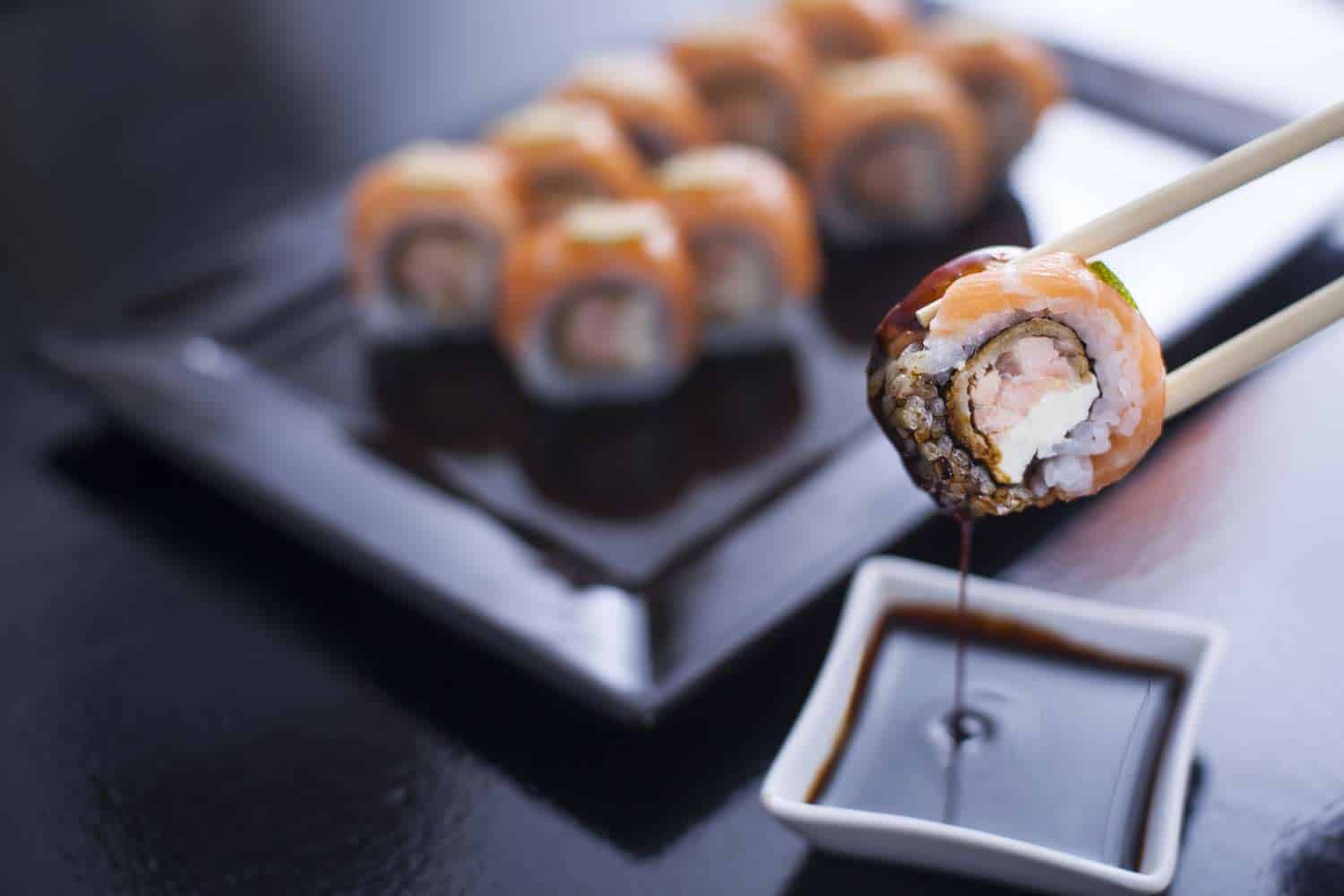 Using soy sauce, and endless number of dishes can be prepared, from fried vegetables, rice, soups, all types of meats, fish, seafood, etc.

It is also used as a salad dressing. The majority of us try soy sauce for the first time with sushi because they pair excellently together.

Another favorable aspect of this dish is the fact that there are variations of it for people who are gluten sensitive or gluten intolerant.

Gluten-free soy sauce has been produced since 1962, without rice grains; it was first introduced in European countries such as Spain.

Among the most popular recipes we can make at home, we have:

How to Make Soy Sauce

There are many ways to make soy sauce, for example on a large scale its traditional production consists of fermenting grains of soya with toasted wheat, as we stated earlier.

In this case, they are put into blocks, so that they can be submerged again and again in clay pots filled with cold water and salt, for approximately a year.

Another way of preparing it industrially is by using artificial hydrolysis.

This process is faster and cheaper than the first one, however it results in a sauce that has a weaker flavor, but the use of this method has increased rapidly in many countries.

None of the ingredients are fermented, instead the soya grains, just like the food coloring, the corn syrup and other sweeteners that are used go through a process of chemical hydrolysis.

Also, a malt extract is added as is monosodium glutamate (only sometimes).

It is important to note that the importation and preparation of artificial soy sauce is illegal in Japan.

If you love the marvelous culinary world and you’d like to prepare every dish you’d want with this sauce, today we invite you to do it with your very own hands.

We will describe you step by step how to prepare this recipe at home, in a very simple, basic and practical way.

This way, you’ll have it available at all times, and you’ll even be able to make some variations according to your own personal preferences. 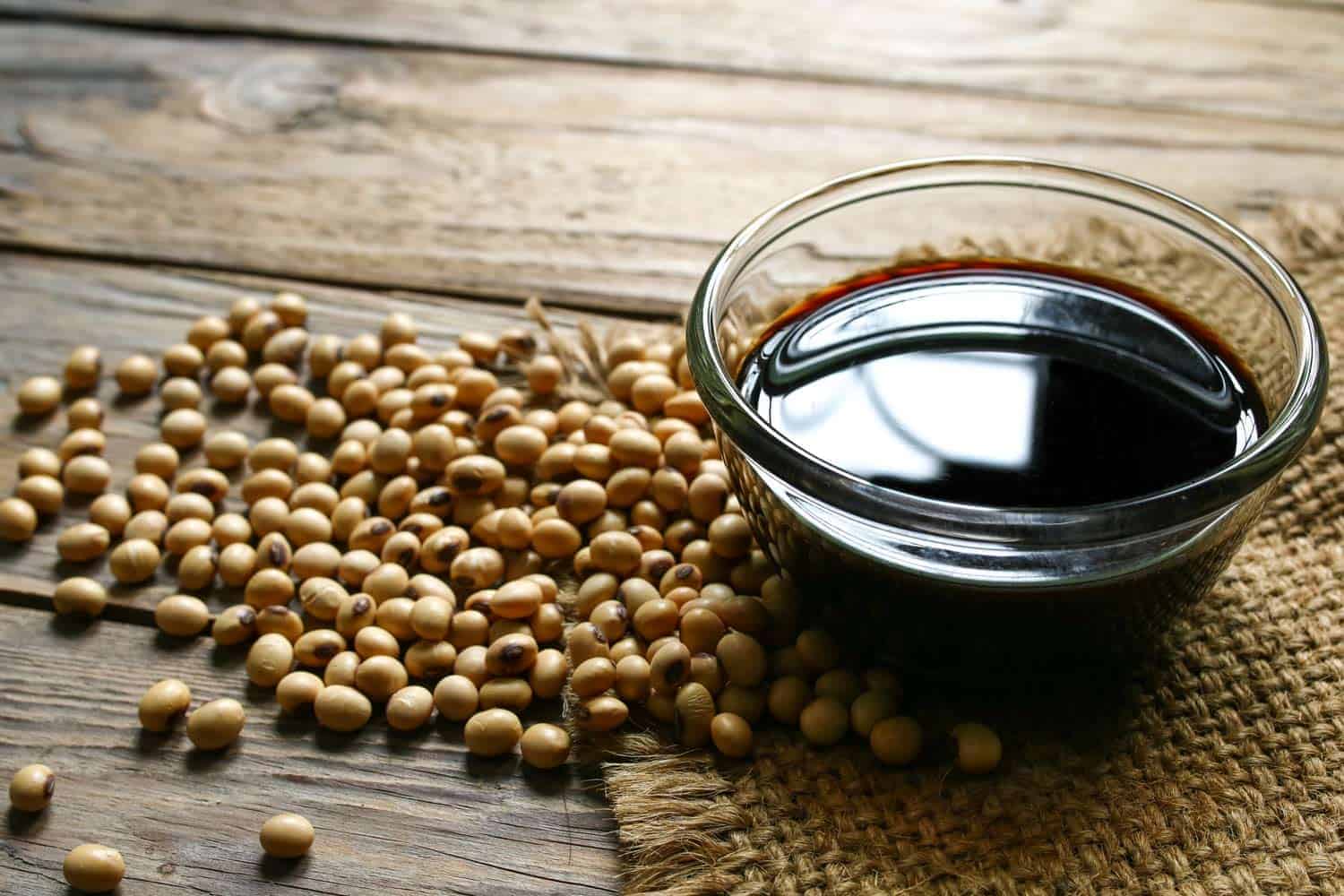 Everything you need to know about soy sauce, one of the most ancient condiments in the world, used in delicious meat, vegetable, and fish recipes, among others.

How to Prepare Homemade soy Sauce

The first thing we’ll do is cook the soya until it is very tender. In order to be sure that the soya is ready we take a small portion of it and we press it with our fingers, if it almost falls apart, it is exactly how we want it.

Next, we finely cut it and shred the grains until we get a consistency similar to that of a purée.

Then, we take the flour and mix it with the shredded soya, until it integrates well and the dough is compact.

Continuing on, we shape the dough into little cylinders so we can cut it into small pieces.

We let it rest in a tray or a container at 30°C and we cover it with a kitchen towel for approximately one week.

When the time has passed, a mold will have formed that covers the dough. We bring it to the oven and heat it at 60°C with heat above and below and we let it dry completely.

The next step is to add pieces of the dough in a pot or a large container with enough water and salt. We cover it again with a towel or plastic and we let it ferment for another two weeks.

We stir the mixture once a day during this period, which could take longer depending on the temperature of the place we put it.

This is an easy process but it requires a lot of patience in order to obtain the flavor and the color characteristic of soy sauce.

It will be ready when the solid part is in the bottom of the mixture and the liquid part becomes the dark color characteristic of this condiment.

Lastly, after many weeks of waiting, we filter all of the contents of the pot and now we have a stupendous homemade soy sauce.