Hollandaise sauce is another one of the “mother sauces” regularly used in modern cooking. This means that other types of sauces can be obtained from variations of this sauce, making it somewhat like a “mother”.

Today we are going to talk about a special sauce that works as a complement for our meals.

It has an extra-creamy texture and smells of spices, something that it gets from some culinary secrets.

And of course, if you would like, we will teach you everything you must know about Hollandaise sauce.

Are you excited? If the answer is yes, do not wait any longer, we present you here all its history and variations. Furthermore, we also present the step-by-step instructions of the recipe, so you can make delicious and homemade Hollandaise sauce in your very kitchen.

You will be surprised by the fact that the Hollandaise sauce has no relation with Holland, except for its name.

Hollandaise sauce was created in France by the famous “king of cooks and cook of kings”.

Marie Antoine Caréme was a chef and author of “L’art de la cuisine française” (“The art of French cuisine”), published between 1833 and 1834.

This cookbook has 5 volumes, and because of it Marie Antoine is known as the creator of the French system of sauces

Did you know he is also responsible for the uniform chefs wear nowadays?

Indeed, the white uniform with a high cap was created by this man who revolutionized culinary arts.

Back in his day, he cooked for the Prince of Wales the future king George IV, the tsar Alexander and Napoleon I.

And these are just some of the greatest personalities he cooked for, because there were many more.

We already know who created this sauce and you surely will be asking about the true origin of its name.

Why is this sauce called Hollandaise when it is from France?

Before getting this name, it used to be known as Isigny sauce in honor of a French city.

This city was located in the north of the country and was famous because in it all the derivatives of milk were produced.

Such as butter, cheese and others. Well, this is beyond the point, let´s get into the big dilemma.

Back in those days the territories to the north of France and the ones next to them used to change their borders frequently.

because of this, Isigny and Holland belonged to the same territory before 1867.

It is said that due to this political division, the sauce stopped being called Ignacy and then started being called Hollandaise and this has been preserved even to today.

Derivate sauces from the Hollandaise

Because this is a “mother” sauce, it permits some variations, which are little changes and in this way produce other sauces that are just as delicious.

To the original recipe we can add in some cases cream, in others mustard and also garlic.

But also we can just change the kind of butter we are using, or use orange juice instead of lemon juice.

Whatever the sauce we get, it will surely have a delicious taste.

The derivatives of the Hollandaise sauce are as follows, and we will be talking about them in future occasions.

Every gastronomy lover likes to make their own homemade preparations.

Perhaps as a hobby or to offer an extraordinary supper in which we can highlight the flavors of the ingredients we used.

The point is that although nowadays almost everything comes in bottles we can buy in any market, there is nothing more pleasant than a traditional recipe made by our own hands, adding our personal touch.

This is the reason we now show you the full homemade recipe so you can make your own Hollandaise sauce.

It is true there are different styles for this kind of recipe, and we will give you one that is optional so you can choose the one you like the most.

We would like to warn you that this is a delicate preparation and it takes patience but it is worth it.

Once you have finished preparing it, you can enjoy it with salmon or the famous Benedictine eggs.

And in this way you can use Hollandaise sauce with every dish you would like, it all depends on you. 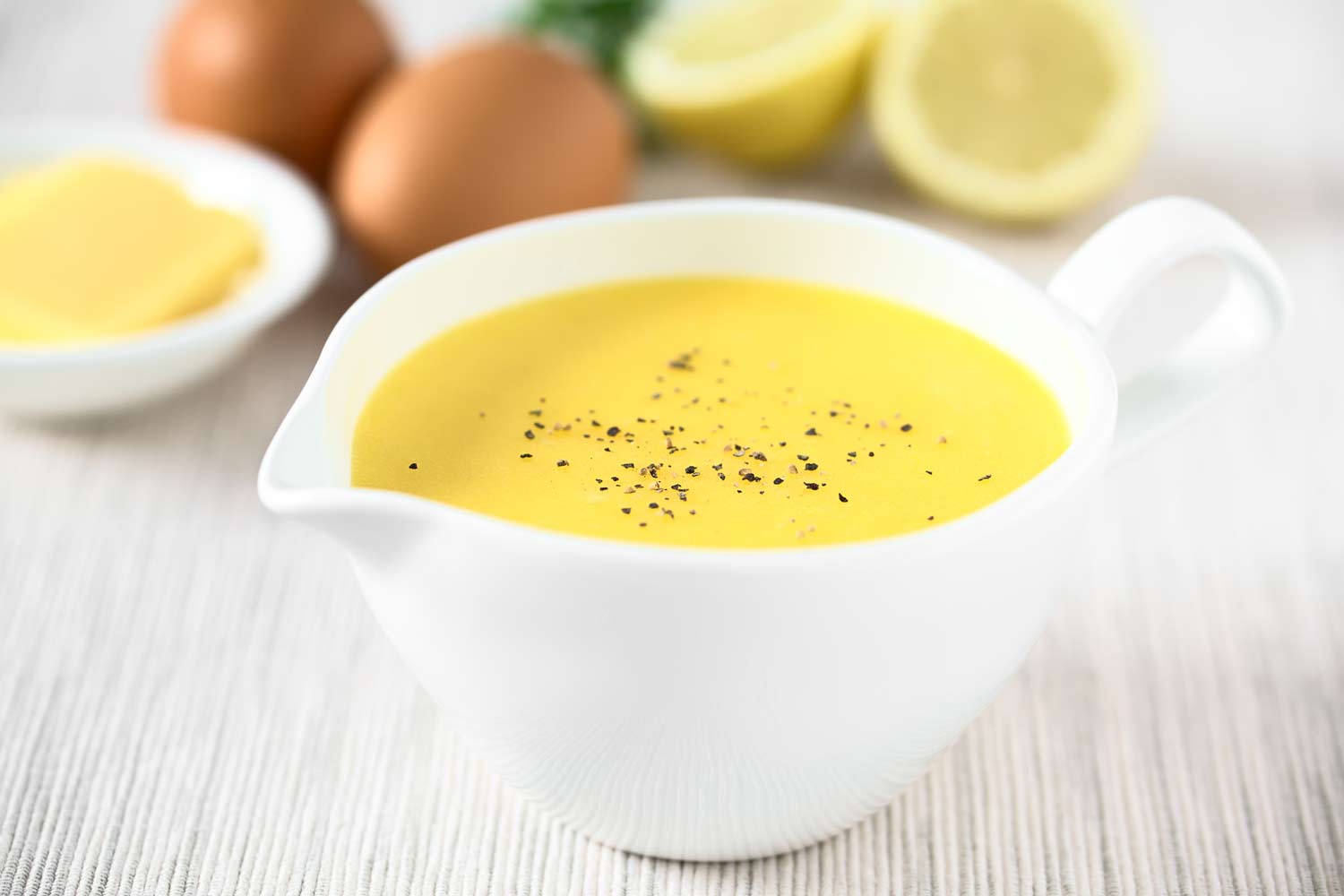 The delicious Hollandaise sauce, a French creation that is served warm and is excellent to enjoy with gourmet dishes.

How to make hollandaise sauce

Put the 4 egg yolks in a container in a bain-marie and beat them with a beater using slow speed. You can also do it by hand but it will take more time so you must be patient.

When the mixture of the yolks is almost ready, add the butter in a thread-like form and keep beating.

It will have the right consistency when it is smooth, then add the lemon juice without stopping beating.

Now add the salt and the pepper. Beat for one more minute.

Let it cool at room temperature until it is warm and then serve it immediately.

Important: it is ideal to use clarified butter or ghee, on the contrary it would be necessary to melt it, eliminate the foam before adding it, and lastly be careful of not adding the whey to the mixture, in doing this we get a creamy and fine sauce.

Another way of preparing this recipe, using the same ingredients but in a more practical way without changing its flavor too much, is this one we propose next.

First, melt the butter without letting it boil or get too hot. Set it aside.

In a blender add the rest of the ingredients: the yolks, the lemon juice, the salt and the pepper. Beat everything on high speed for a minute.

After this time add the butter in a thread-like form and keep beating until it gets thick.

These are the two variations of how the Hollandaise sauce can be prepared at home.

If you had doubts about how to do it, you know now all the steps, you just need to go to the kitchen and get to work.

The recipe we showed you first was the classic one and always uses butter.

But there are some people who do not have butter at hand and use olive oil instead but we warn you that neither the taste nor the consistency is the same; in fact, it changes rather radically.